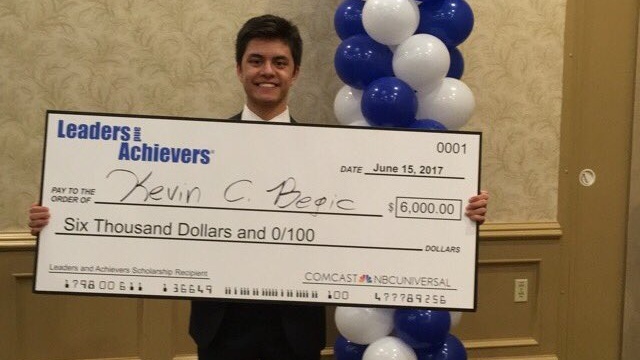 The Comcast Leaders and Achievers® Scholarship Program is a nomination-based award that recognizes the best and brightest high school seniors nationwide. The philosophy behind our program is to give young people every opportunity to be prepared for the future, to engage youth in their communities, and to demonstrate the importance of civic involvement, and the value placed on civic involvement by the business community.

Kevin Begic, of Taylor who graduated from the University of Detroit Jesuit High School and Academy, was randomly selected to receive an additional $6,000 Comcast Founders Scholarship which was instituted in honor of our company’s founder and chairman emeritus Ralph J. Roberts.

We followed up with Kevin to ask him about his commitment to giving back. He shared the most rewarding part of dedicating his time and effort to others comes when he sees their reactions.

“The best experience from being involved in a community is seeing the excitement and happiness that comes directly as a result of my hard work,” Kevin said.

Kevin will attend the University of Michigan in Ann Arbor this fall and plans to study biology and computer science.

The Comcast Leaders and Achievers Scholarship Program was launched nationally in 2001, and Comcast has awarded nearly $26 million in scholarships to help nearly 25,000 high school students throughout the country to pursue their higher education goals.

If you’re like many parents of young children, you’ve peered into your child’s room well after “bedtime” only to be surprised by the all-too-familiar glare of a … END_OF_DOCUMENT_TOKEN_TO_BE_REPLACED